In a comment to my earlier post on ocean cycles, Nick Stokes challenged my interpretation of a quote from the new Nature Climate Change paper by Meehl, et al. The quote is from the abstract:

“Here we show that the largest IPO [Interdecadal Pacific Oscillation] contributions occurred in its positive phase during the rapid warming periods from 1910-1941 and 1971-1995, with the IPO contributing 71% and 75% respectively, [to the difference between the median values of the externally forced trends and observed trends.]”

Immediately after the quote, I wrote “This directly contradicts the IPCC conclusion that man caused most of the warming between 1951 and 2010.” Nick posted more of the quote, adding the part in bold. He also contested my interpretation that this contradicts the IPCC conclusion that man caused most of the warming from 1951 to 2010. We were both working from the abstract only and couldn’t reconcile our differing interpretations without the full paper. Professor Curry has kindly sent me the full text, so I will summarize it and try to resolve the issue in this post. There are two lessons here. The first is, it is dangerous to draw conclusions from an abstract. The second is that abstracts should be written as stand-alone documents. They should not include jargon, for example “median values of externally forced trends” that cannot be understood without reading the whole paper. Many people are only able to see the abstract.

Indeed, reading the entire paper, we can see what the authors mean. The authors compare observed global mean surface temperatures from HadCRU 4.4, GISS and NOAA to two global climate models. The first model, shown in figure 1a (the author’s Figure 2a) as a black line and in figure 1b as a black dot, is the normal multi-model CMIP5 ensemble mean used in the 2013 IPCC WG1-AR5 report. The observations are shown in yellow (HadCRU 4.4), blue (GISS), and red (NOAA).

As pointed out in my previous post, I want to draw your attention to the poor fit between the model and the observations between 1910 and 1945. This period of warming is very similar to the recent warming from 1975 to 2009, but the ensemble model mean matches the later observed trend and does not match the earlier observed trend.

To produce the data shown in figure 1b, the authors used a computer model (CCSM4) that has

“…been analysed the most extensively of any current climate model with regards to IPO processes and mechanisms, and compares favourably in those aspects to observations.”

They support this statement by referring to four papers here, here, here and here. Once the CCSM4 model output was generated they added the “IPO-mediated trend distributions” from it to the multi-model ensemble of CMIP5 simulations. The ensemble mean includes both the CMIP5 natural and anthropogenic forcings. But, as we saw in figure 3 of the last post, the CMIP5 natural forcings are essentially zero.

Figure 1b then compares the IPO (Interdecadal Pacific Oscillation) warm and cold phases to the observations (colored dots) and to the multi-model ensemble mean (gray boxes). The gray boxes contain the CMIP5 “unadjusted” median value as a heavy black line and encompass the 25th to 75th percentile values. The whiskers encompass the 5th to 95th percentiles. The IPO-adjusted values are shown as red boxes when the IPO is in a warm phase and blue boxes in the cold phase. Again, the median value is a line, the colored box encompasses the 25th to 75th percentile and the whiskers the 5th to 95th percentile. 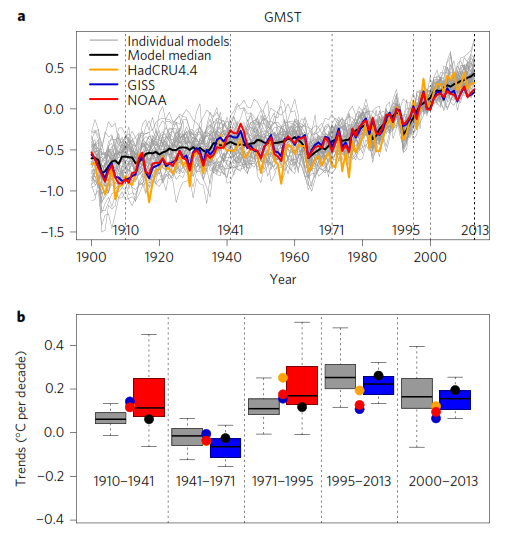