There is a new post by Dr. Sebastian Lüning and Professor Fritz Vahrenholt, translated by Pierre Gosselin, on the effect of ocean cycles on 20th century warming and the 21st century pause. They had previously written about this in their popular book The Neglected Sun, in English here. Marcia Wyatt and Judith Curry have also written about the effect of ocean cycles here. These roughly 60 to 65-year cycles have the advantage of explaining the warming from about 1910 to 1944 and the warming from 1975 to 2005 with a similar mechanism. This is important, because the two warming events are very similar, as shown here and in figure 1. 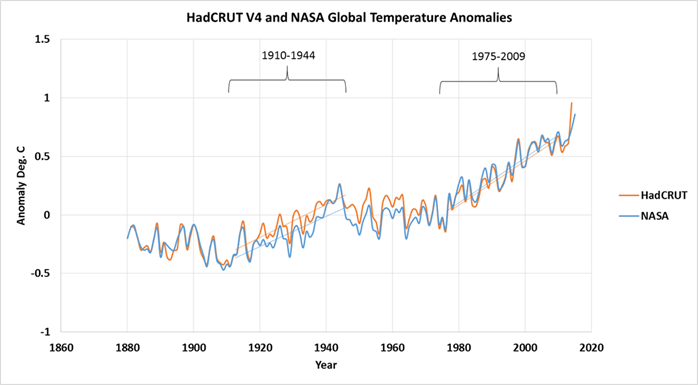 In the IPCC WG1 AR5 document (page 887), they have a hard time explaining the earlier 20th century warming. The text is so confusing we will not attempt to paraphrase it:

“Nonetheless, these studies do not challenge the AR4 assessment that external forcing very likely made a contribution to the warming over this period. In conclusion, the early 20th century warming is very unlikely to be due to internal variability alone. It remains difficult to quantify the contribution to this warming from internal variability, natural forcing and anthropogenic forcing, due to forcing and response uncertainties and incomplete observational coverage.”

Why is this warming “difficult to quantify” and the later warming “extremely likely” due mostly to man? The two temperature profiles are nearly identical after removing the secular trend out of the Little Ice Age.  But, the first is a mystery and the second is understood? We have a problem with this.

Figure 2 is a portion of FAQ 10.1, Figure 1 in WG1 AR5 (page 895). The bottom graph shows the mean surface temperature in black, the CMIP 3 global climate model in blue and the CMIP 5 climate model in red. All natural and anthropogenic model components are included. The warming trend from 1975 to 2009 is modeled well. But, the similar warming from 1910 to 1945 is not, the models simply slice through the mid-point. The top graph shows the same surface temperature record in black. But, the two models are run with the IPCC assumed natural forcing alone, leaving out the anthropogenic forcing. Since the natural forcing is assumed to be close to zero (see figure 3), except for volcanism, the line is flat with dips at volcanic events. In the top graph neither warming period is modeled well. 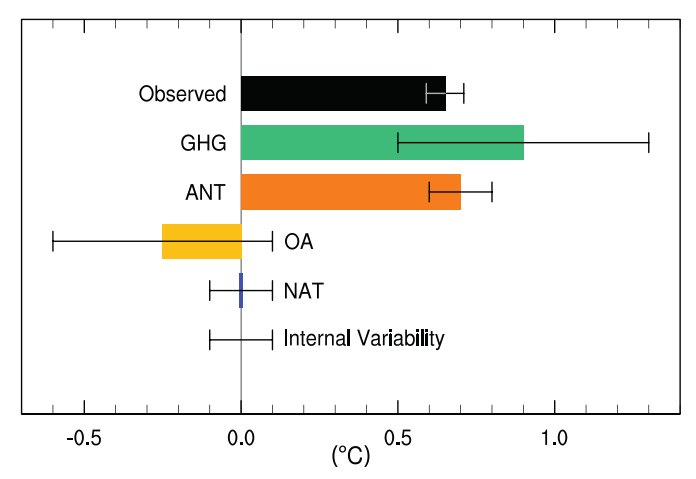 Figure 3 is from WG1 AR5 figure 10.5 (page 884). The observed warming (1951-2010) is again shown in black, the greenhouse gas warming (GHG) is shown in green, the combined anthropogenic forcings (ANT) are shown in orange, other anthropogenic forcings (“OA,” mostly reflective aerosol emissions) are shown in yellow, all natural forcings are shown in blue and labeled “NAT.” Internal variability, basically the ocean cycles, is assumed to be zero over the period of 1951-2010. It should be clear from these graphs that something important is left out of the models for this relatively short time period. Lüning, Vahrenholt, Wyatt and Curry and many others would suggest that they have not modeled the ocean cycles correctly.

A summary of Wyatt and Curry’s stadium wave ocean cycle theory can be seen here. As Lüning and Vahrenholt note in their recent post there have been a flood of new papers discussing the role of ocean cycles in recent global warming trends. These include Meehl, et al. in the August 2016 Nature Climate Change. If the link doesn’t work, look up “Contribution of the Interdecadal Pacific Oscillation to twentieth-century global surface temperature trends” in Google scholar. Meehl, et al. write:

“Here we show that the largest IPO [Interdecadal Pacific Oscillation] contributions occurred in its positive phase during the rapid warming periods from 1910-1941 and 1971-1995, with the IPO contributing 71% and 75% respectively, …”

This directly contradicts the IPCC conclusion that man caused most of the warming between 1951 and 2010. The tropical Pacific Ocean cooling from the early 1990’s to 2013 may have been one of the causes of the “pause” in surface warming observed from 2000 to 2010. This is discussed in more detail in a new paper by Chikamoto, et al, “Potential tropical Atlantic impacts on Pacific decadal climate trends.” The tropical Pacific Ocean cooling was not predicted by the IPCC climate models and it may have had an impact on global warming. Chikamoto, et al. present a new model that does model the pause. It is based, in part, upon Pacific and Atlantic sea surface to 700 meter depth temperature and salinity trends.

Another paper suggesting that the IPCC CMIP5 models do not account for multidecadal ocean cycles was recently published by Peings, et al. in the Journal of Geophysical Research, see here. Monika Barcikowska, et al. suggest in the AMS Journal of Climate, that sea surface and atmospheric temperatures are dominated by a 65 year variability component. This variability suggests that the warming trend from the 1970’s to the 2000’s will be followed by a cooling trend of similar length.

In conclusion, it seems highly unlikely that natural forcings (“NAT” in figure 3) and internal climate variability are zero or close to zero as claimed by the IPCC in WG1 AR5. That being the case, anthropogenic forcings are overestimated in that study, since they were computed by subtracting the natural forcings. We now have numerous studies, many are cited above, that make it clear that multidecadal ocean cycles of 60 to 65 years have a significant influence and appear to explain most, if not all of the warming seen from 1910-1944 and 1975-2009.

Dr. Lüning and Professor Vahrenholt received a great deal of criticism when they published their book “The Neglected Sun” in 2012. At present, they are accepting apologies for this criticism – if it is from the heart. You can contact them here.