The phrase “Ice Age” is poorly defined and often abused, so let’s first define the climate state during most ice ages. It is called “Icehouse Earth.” The earth is in an icehouse state when either or both poles are covered in a thick, permanent icecap (Scotese 2015). Today, both poles are covered in ice year-round, so you may be surprised to learn this is very rare in Earth’s history. In fact, out of the last 550 million years, the earth has had permanent ice caps on one or both poles only nine percent of the time.

An “Ice Age” is best defined as a geologically (or millions of years long) long period of low temperatures. This usually results in the presence of continental and polar ice sheets and alpine glaciers. We are currently living in the Quaternary Ice Age, this is only the fifth significant and severe ice age in Earth’s known history, and, so far it has lasted about 2.6 million years (technically 30+ million years ago when permanent ice appeared on Antarctica). It is the most severe ice age in the Phanerozoic, the geological name for the past 550 million years. Ice Ages are rare, but humans evolved during one, so it seems normal to us.

Figure 1. Christopher Scotese’s geological interpretation of Phanerozoic global temperatures in degrees C. The vertical line on the right side, labeled “PAW” is a projection of possible anthropogenic warming according to a pessimistic IPCC climate model. In 2016 the actual global average surface temperature of the Earth was about 14.5 degrees C. as marked on the plot, in 2019 the temperature is slightly lower at 14.35 degrees according to NASA GISS. The names of the major ice ages were added by the author. After (Scotese 2015)

As Figure 1 makes clear, the “normal” or “optimum” global average temperature of the Earth is 19.5 degrees C. or 67 degrees F. This is over 5 degrees C. (9 degrees F.) warmer than today. Over the past 550 million years, the Earth has normally been in the green area of Figure 1, the “Greenhouse” or optimal temperature regime. There are five periods when the Earth became very warm with average surface temperatures of more than 24 degrees C. or 75 degrees F. This area is called “hothouse” and is shaded in red in Figure 1. The blue area in Figure 1 is called the “icehouse” and we are living in the fourth or fifth icehouse period. Normally the Karoo Ice Age is considered one icehouse period, but it briefly returns to greenhouse conditions in the middle. The sharp cooling period labeled “KT Impact Winter” occurred 66 million years ago and was caused by a large asteroid striking the Earth near the Yucatan Peninsula in southern Mexico. The ejecta, which included a lot of SO2, from the crater caused a sudden cooling of the Earth and the extinction of all large animals, including the dinosaurs. This impact also marks the end of the Cretaceous Period and the beginning of the Tertiary. It is not considered an Ice Age, as it is too brief. In this article, the Jurassic-early Cretaceous Cool period will be considered an ice age, although the temperatures were not low enough to enter the icehouse state for any significant period.

As shown in Figure 2, the global temperature of the tropics (roughly 23.5 degrees north latitude to 23.5 degrees south latitude) varies less than the average global temperature of the entire Earth’s surface (see Figure 1). This means that the temperatures in the polar regions vary a lot from warmer periods to cooler periods. In the cooler periods, like our current ice age, the polar temperatures are low enough for ice to survive the summer months and thus, form permanent ice caps. Ice reflects more solar radiant heat than the soil or ocean under it, which amplifies the cooling.

With today’s configuration of the continents, the tropics are mostly covered with ocean water, which has a very high heat capacity, which means a lot of thermal energy is required to change the ocean water temperature. This characteristic of the oceans, plus the cooling effect of water evaporating from the ocean surface, carrying considerable thermal energy away as latent heat, reduces, or dampens, changes in tropical temperatures. But, even when the continents are clustered around the equator, the temperature change in the tropics is less than at the poles. Christopher Scotese has made a terrific animation of both plate movement and ice ages coming and going in the Phanerozoic that can be viewed here. Figure 3 is a screenshot from the animation showing the position of the continents 204 million years ago, in the Late Triassic. At this time, the land masses cover a lot of the tropics and the tropics are less than three degrees warmer than today (Figure 2). Yet, the average surface temperature is eight degrees warmer, implying that the polar temperatures are much higher than today. There are no ice caps on either pole at this time.

Figure 3. The continental land masses 204 million years ago according to Christopher Scotese. There are no ice caps on either pole.

When viewing Scotese’s animation, one must consider that sea ice normally leaves no geological record. Evidence of glaciation, such as striations (“striae,” Figure 4) on rock surfaces or anomalous boulders (“erratics, “Figure 5) that were carried large distances inside glaciers are not preserved, normally, from sea ice. In recent times, in the North Atlantic, icebergs, calved from Greenland, can carry erratics out into the ocean that can be seen in subsea cores. But, interpreting these requires considerable knowledge about currents and the nature of the rocks under the ice in Greenland that we do not have for older glaciations. It also requires that the sediments containing erratics be preserved. Older rocks are not preserved on ocean floors due to plate subduction in ocean trenches. 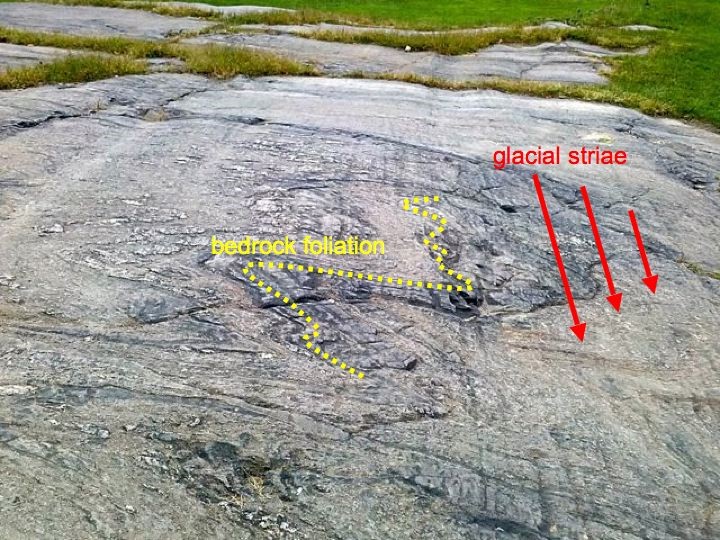 Figure 5. Erratic boulders in The Netherlands, they were transported by glaciers from Norway. Source: Michielverbeek.

What causes ice ages? They occur roughly every 150 million years, as we can see in Figure 1. Notice that I am including the Jurassic-early-Cretaceous cool period (see Figure 1) as an “ice age,” even though it did not reach icehouse conditions. One possible explanation relies on the hypothesis that the amount of galactic cosmic rays striking the Earth varies as the solar system traverses the arms of the Milky Way, which it does roughly every 135 million years, plus or minus 25 million years (Svensmark and Svensmark 2017). The theory suggests that when more high-energy cosmic rays strike the Earth, more low-level clouds form. Low-level clouds cool the planet because they reflect more thermal energy than they trap under them. This reduces the warming effect of solar radiation (Svensmark, et al. 2017). This effect is one of the possible reasons that low solar activity and reduced solar wind in the eleven-year solar cycle minima cause the Earth to cool. A strong solar wind and high solar activity, during solar cycle maxima, reduce (attenuate) the cosmic rays in space before they strike the Earth, cloud cover goes down and temperatures go up, and vice-versa (Svensmark 2019). A definitive causal link has not been demonstrated to everyone’s satisfaction, although the work by Henrick and Jacob Svensmark is quite convincing. We consider the theory very intriguing, but still controversial. 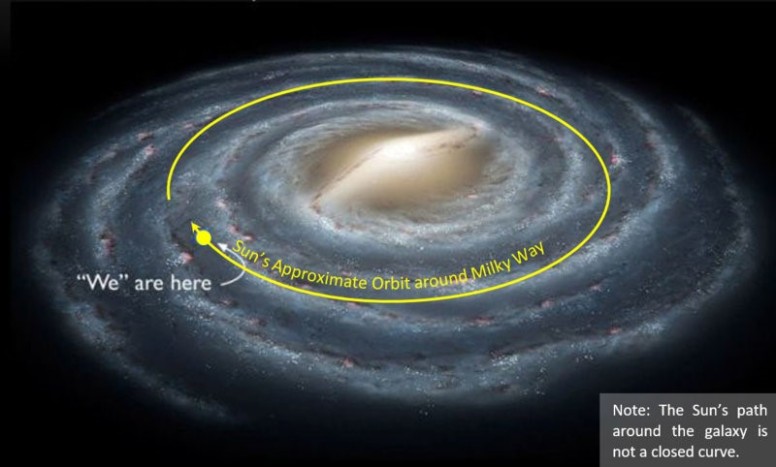 Figure 6. The Solar System orbits the center of the Milky Way galaxy and passes through spiral arms roughly every 150 million years. Currently the Solar System is at the edge of the Sagittarius Arm of the galaxy. The Solar System also moves up and down relative to the Galactic Plane and its position up or down is not known very accurately. Source: Physics Forums.

If the cosmic ray and climate link is true, it could explain why ice ages occur. The density and energy of cosmic rays is higher in the Milky Way arms because there are more stars there (Shaviv 2002). So, the theory suggests that each time the solar system crosses a galactic arm, an ice age could be triggered. This idea was originally developed by Edward Ney of the University of Minnesota (see here) and the details of the theory are explained well by Nir Shaviv (Shaviv 2003). Shaviv also explains that variations in cosmic ray density is recorded in meteorites and that these variations correlate well with the known ice ages and with computed solar system galactic arm transits.

Ice ages are often confused with glacial periods, or periods of glacier advance, that are interrupted by periods of glacial retreat, called interglacials. We are currently living in an interglacial we call the Holocene, see Figure 7. The forces and mechanisms that cause glacial advances and interglacials within an overall ice age are understood reasonably well and are well described by Javier, here and here. A plot of Antarctic temperatures, interpreted from ice cores, for the past 750,000 years is shown in Figure 7. The interpretation was done by Ryu Uemura and colleagues (Uemura, Motoyama and Masson-Delmotte 2018). 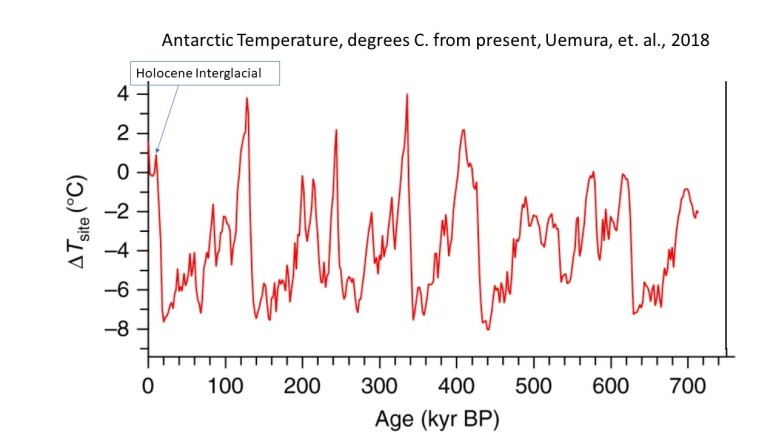 Figure 7. Antarctic temperature deviation from today. The global average temperature today is about 14.5 degrees C. or 58 degrees F. After (Uemura, Motoyama and Masson-Delmotte 2018).

The Earth’s normal or optimum global average temperature over the past 550 million years is about 19.5 degrees C. or 67 degrees F. according to the temperature reconstructions done by Christopher Scotese. The normal state of the Earth’s climate is called the “Greenhouse” state, in this state there are no permanent, year-round ice caps on the North or South poles. But, in the past 550 million years there have been four, long anomalously cool periods we call Ice Ages. In three of these cool periods we entered icehouse conditions where there were permanent, year-round ice caps on one or both poles. We are currently living in the most recent ice age; we are also in icehouse conditions and have permanent ice on both poles. In the past 550 million years we have been in icehouse conditions about nine percent of the time and the current icehouse is one of the most severe in that period.

There is no general agreement on why the Earth has ice ages or why they appear in a roughly regular pattern. But, as Nir Shaviv has shown there is some evidence that the position of the Earth, relative to the arms of the Milky Way Galaxy, correlates with the occurrence of Ice Ages in our history. It also correlates with cosmic ray density. High cosmic ray density and energy also correlate with the ice ages and low cosmic ray energy correlates with warmer periods as shown by Shaviv’s meteorite studies. Henrik Svensmark provides us with a mechanism for creating additional low level, cooling clouds, as cosmic ray density and energy increases. Cosmic rays increase when the solar system is in the Milky Way galactic arms because there are more exploding stars in the arms, and they are the source of cosmic rays.

Experiments at the Large Hadron Collider (CERN) were used to create a model of cosmic ray/atmospheric ion collisions. The model suggested that cosmic rays have a minimal effect on cloud formation. However, subsequent experimental and theoretical work by Svensmark and Svensmark has suggested the model is flawed. In our judgement, while the cosmic ray/climate connection is far from proven, it is still a viable hypothesis and worth considering.