In previous posts (here and here), I’ve compared historical events to the Alley and Kobashi
GISP2 Central Greenland Temperature reconstructions for the past 4,000 years. Unfortunately, these two reconstructions are very different. Recently Steve McIntyre has suggested a third reconstruction by Bo Vinther. Vinther’s data can be found here. Unfortunately, Vinther is often significantly different from the other two. The Alley data has been smoothed, but the details of the smoothing algorithm are unknown. So the other datasets have been smoothed so they visually have the same resolution as the Alley dataset. Both datasets (Kobashi and Vinther) were first smoothed with a 100 year moving average filter. Then 20 year averages of the smoothed data were taken from the one year Kobashi dataset to match the Vinther 20 year samples. The Alley data is irregularly sampled, but I manually averaged 20 year averages where the data existed. If a gap greater than 20 years was found that sample was skipped (given a null value).

There are some notable outliers apparent in the comparison. In particular, we see the odd 700AD Kobashi spike, the scatter in the interval from 700BC to 100BC, and the Minoan Warm Period is completely missing in the Vinther reconstruction. The estimates agree better from 900 AD to the present than they do prior to 900 AD. Perhaps as the ice gets older accuracy and repeatability are lost. Figure 2 shows the same average and the maximum and minimum value for each 20 year sample. 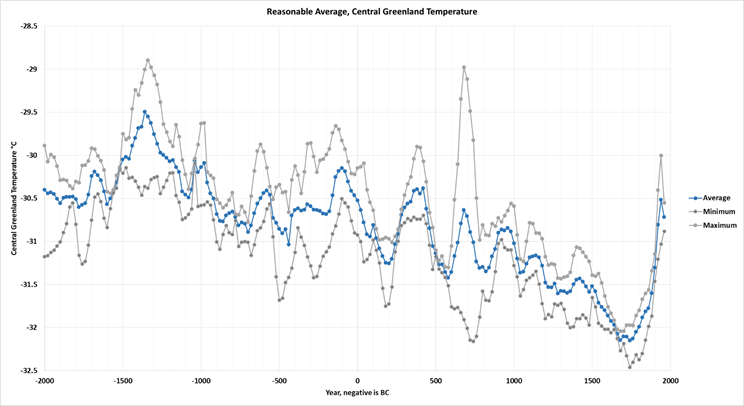 The average temperature for the 4,000 year period is -30.8°C. The average minimum and maximum suggest this value is plus or minus 0.3°C. Perhaps we are simply seeing the error in these methods and nothing more. For those who want to see the messy details of the average temperature calculation the spreadsheet can be downloaded here. As noted in my previous post, the error in the time axis is probably at least +-50 years. Loehle has suggested a time error of +-100 years based on 14C laboratory errors. These give us some perspective in interpreting the reconstructions. Below is a comparison of the average to the same historical events we have used before. 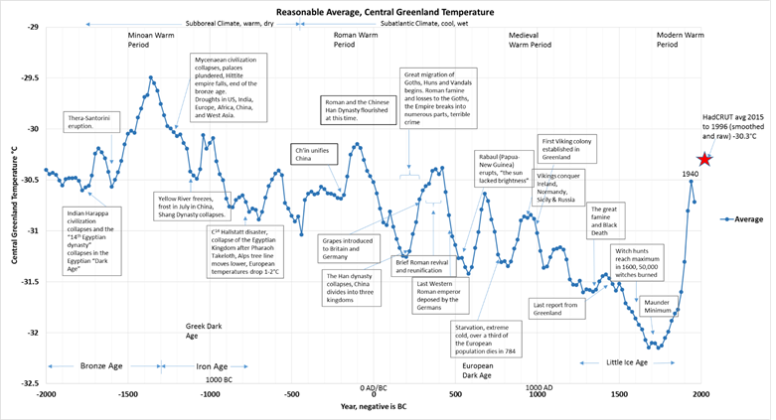 This average temperature reconstruction shows a steady decline in temperature since the Minoan Warm Period, interrupted by +-120 year cycles of warm and cold. Don’t take the apparent 120 year cyclicity too seriously all of the data was smoothed with a 100 year moving average filter. After the end of the coldest period, the Little Ice Age, the Modern Warm Period begins and temperatures rise to those seen in the Roman Warm Period. The Modern Warm Period is equivalent to the Medieval Warm Period within the margin of error. We need to be careful because we are comparing actual measurements to averaged proxies. When proxies are averaged all high and low temperatures are dampened. In particular, the Medieval Warm Period is somewhat smeared and dampened due to the Vinther record. The Vinther Medieval Warm Period peak is earlier than the Kobashi and Alley peaks. Major volcanic eruptions fit this timeline reasonably well. Rabaul is noted at 540AD. Others are Thera-Santorini in 1600 BC and Tambora in 1815. The HadCRUT 4.4 point shown with a red star is an average of several HADCRUT4 surface temperature grid points in the Greenland area thought to be comparable to the Greenland average temperature.

Kaufman’s Arctic reconstruction used a lot of tree ring data (4 of 23 proxy records) as can be seen in his Figure 3 and in his dataset. Tree ring data does provide an accurate chronology, but it provides a poor temperature proxy due primarily to what has been called the “divergence” problem. Tree rings may correlate well to temperatures in a “training” period, but show little correlation to temperature longer term. This is probably because forests adapt to long term climatic changes by adjusting tree density and tree size. Tree ring widths can reflect summer temperatures, precipitation and many other factors, but extracting the average air temperature from them is problematic. Loehle discusses this problem and other problems with tree ring data here and here. For this reason, only the ice core records (seven proxy records of 23) from Kaufman’s reconstruction were used to plot the “Arctic” line in Figure 5. Figure 6 compares Kaufman’s “All proxies” reconstruction to his ice core, sediment (and lake varves) and tree ring proxies. The ice core, sediment and tree ring proxies only agree reasonably well for the last 500 years, before that the tree ring proxies diverge dramatically downwards. The lake and marine sediment proxies (12 of the 23) are lower than the ice core proxies also, but not so dramatically. We all know of another paleoclimatologist who took advantage of this divergence.

When all of the proxies are used the earlier temperatures are much lower and the modern warm period has a higher peak. The recent peak in the graph is the twenty year average around 1945. The proxy reconstruction then drops, the last point is centered on 1985. I didn’t bother to “hide the decline.” Except for the sharp drop from 1945 to 1985 Kaufman’s ice core proxies fit the rest of the reconstructions shown here reasonably well.

There are many Greenland area temperature reconstructions, they use ice core data, lake and marine sediment core data and other proxies, mainly tree rings. They are not perfect and contain errors in the temperature estimates and errors on the time scale. The exact error is unknown, but by comparing reconstructions we can see that they generally, except for the tree ring proxies, agree to within 0.3°C and in time to within 50 years or so. Why is this important? Natural climate cycles are poorly understood. Some like the ENSO cycle (La Nina and El Nino) we can identify, but because they are irregular and the cause is unknown we cannot model them. The same is true of the Atlantic Multidecadal Oscillation (AMO) and the Pacific Decadal Oscillation (PDO). These events affect the weather and climate all over the world, but they are not accurately included in the GCM’s (General Circulation Models) used by the IPCC and other organizations to compute man’s influence on climate. Thus, some portion of the Modern Warm Period attributed to man may, in fact, be attributable to these or other natural climate cycles.

During the 1980’s and 1990’s the PDO was mostly positive (warming). From the mid 1990’s to today the AMO has been mostly positive and undoubtedly contributing to warming. There have been numerous attempts to see a pattern in these multidecadal natural climate cycles. Most notably, Wyatt and Curry identified a low-frequency natural climate signal that they call a “stadium wave.” This model is based on a statistical analysis of observed events (especially the AMO) and not on the physical origins of these long term climate cycles. But, it does allow predictions to be made and the veracity and accuracy of the stadium wave hypothesis can and will be tested in the future.

Another recent paper by Craig Loehle discusses how the AMO signal can be removed from recent warming, leaving a residual warming trend that may be related to carbon dioxide. He notes that when the AMO pattern is removed from the Hadley Center HADCRUT4 surface temperature data the oscillations are dampened and a more linear increase in temperature is seen. This trend compares better to the increase in carbon dioxide in the atmosphere and allows the computation of the effect of carbon dioxide on temperature. The calculation results in an increase of 0.83°C per century. This is roughly half of the observed increase of 1.63°C. Loehle suggests that the AMO may be the best indicator of natural trends. If this is true then half of recent warming is natural and half is man-made. It also suggests that the equilibrium climate sensitivity to carbon dioxide is about 1.5°C per doubling of CO2. This is the lower end of the range suggested by the IPCC. This value also compares well to other recent research.

The use of temperature proxies to determine surface air temperatures prior to the instrument era is very important. This is the only way to determine natural long term climate cycles. Currently, in the instrument record, we can see shorter cycles like the PDO, AMO, and ENSO. When these are incorporated into models we see that half or more of recent warming is likely natural, belying the IPCC idea that “most” of recent warming is man-made. Yet, these shorter cycles are clearly not the only cycles. When we look at longer temperature reconstructions we see 100,000 year glacial periods interrupted by brief 20,000 year interglacial periods. These longer periods will probably only be fully understood with more accurate reconstructions. Intermediate ~1500 year cycles, called “Bond events” have also been identified.

Tree ring proxies older than 500 years and younger than 100 years are anomalous. This anomaly is large enough to cast doubt on any temperature reconstruction that uses tree rings. Between lake and marine sediment proxies and ice core proxies it is harder to tell which is more likely to be closer to the truth. They agree well enough to be within expected error. All of the proxies diverge from the mean with age, none appear to be very accurate (or more precisely in good agreement) prior to 1100 AD. It does appear that all of the proxies except the tree ring proxies, could be used for analytical work back to 1100 AD; this is encouraging.

The other very important use for temperature reconstructions is to study the impact of climate changes on man and the Earth at large. Historical events are often known to the day and hour, only when we have reconstructions with more accurate time scales can we properly match them to major events in history. In addition, this work made it clear that combining multiple proxies causes severe dampening of the temperature response because the time scale error causes peaks and valleys in the average record to be reduced. Multiple proxy reconstructions show less temperature variation than actually occurred. Ideally, we need a very accurate time scale on all proxies so they can be combined properly. But, achieving more accuracy than 50-100 years will be difficult given current dating technology. Tree rings are more accurate than this, but they are a poor indicator of temperature. There is a lot of work needed in this area.