These drone videos were filmed on a charter of the Miss Kitty, crewed by Captain Pat Little and Admiral Aline Little.  The filming was with a DJI Phantom 3 and done between March 31 and April 4, 2017.  A map of the British Virgin Islands with the drone flying locations shown as red pins with green labels indicating the day and time of the flight is shown below.  The yellow pins show snorkeling sites. 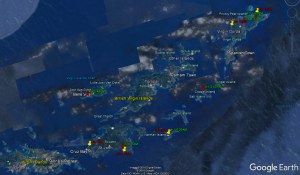 The first video was filmed at St. Johns, USVI.  Click here to play the video.  The blue star on the map shows the location of the flight.  The exact track of the flight is shown in yellow on the blow up map.  St. Johns Island was purchased by the U.S. from the Danish government in 1917.  This flight was made from the deck of the Miss Kitty.

The second video was shot over western Virgin Gorda Island.  Click here to see the video.  Below is a map of the flight.  The blue star on the map of Virgin Gorda shows the drone take off location.  The smaller map shows the exact flight path.  The video was shot about 2:00PM April 2, 2017.  Virgin Gorda was named by Christopher Columbus because of the islands profile on the horizon.  Virgin Gorda means “The Fat Virgin.”  One of its main attractions are “The Baths” which are a collection of scenic granite boulders open to the sea.  Nearly all of the 200 foot plus megayachts of the world have visited Virgin Gorda.  The Bitter End hotel contains the names of Norman Rockwell, Brigitte Bardot and John Wayne.

Below is a map of Norman Island showing a third flight path.  See the video here, it was shot April 1, 2017 at about 9AM.  Norman Island was the inspiration for Robert Louis Stevenson’s famous “Treasure Island.”  The pirate Owen Lloyd actually did bury some pirate treasure on this island in 1750.  The treasure was later recovered by General Gilbert Fleming, more treasure may still exist on the famous island.

Below is a map of the drone flight over Cooper Island.  This flight was from the Miss Kitty deck in wind and has a rather harrowing take off and landing.  The video can be seen here.