I know you’re busy, so I will summarize my key points briefly. I do agree with you on most issues, but some of your positions are show stoppers for me. My entire focus in this presidential campaign is on jobs and the economy. I realize your website says you want to create good-paying jobs and stimulate small business growth. But most of us work for large businesses or government agencies and your policies regarding large businesses are at odds with your stated desire to create good jobs. To create and keep good jobs in America we must support businesses, both large and small, encouraging them to invest in the USA, and make the USA the best place in the world to start and grow a business. All of the money we have comes from businesses large and small, neither the government nor non-profits make any money.

Creating more jobs has multiple benefits. The employed are healthier, live longer, have more self-esteem, and commit fewer crimes. Further, their work adds to the economy as a whole.

“The currently favoured hypothesis of dangerous global warming includes the presumption that the warming is caused mainly by human emissions of the greenhouse gas carbon dioxide. This theory has failed the three main tests that it has been subjected to. Namely:

No close relationship exists between the 20th Century pattern of increasing carbon dioxide and changing temperature; and

His third point is well supported by Professor John Christy’s graph (see below) comparing satellite and weather balloon measured temperatures to climate computer model predictions. It should be noted that weather balloon and satellite temperature measurements are independent of one another and thus validate each other. Global surface temperature estimates (like those from NOAA or the UK Hadley Climate Research Unit) are not validated by independent measurements, neither are the climate computer models. The only computer model that matches the observations is a Russian computer model called INM-CM4 shown in gray. The Russian model has assumed a much lower climate sensitivity to CO2 than the other models and assumes a much, much higher inertia due to deep ocean heat uptake than the others. In other words, the best computer model assumes we have little to worry about. 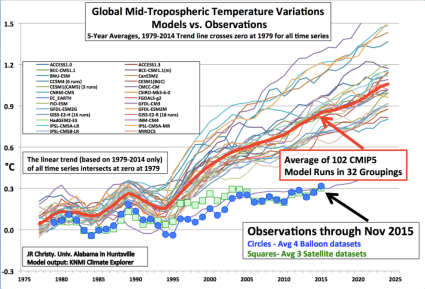 So, as Daniel Kish, vice-president of the Institute for Energy Research told CNSNews.com:

“…they cannot explain why all their [computer model] projections are wrong. They’re putting coal miners out of work all based on a 17-year history that doesn’t exist.”

Thousands of coal miners have been laid off, coal companies have gone bankrupt and there is no evidence that man-made carbon dioxide is dangerous. The same could happen to the millions dependent upon the oil and gas industry. I think you should have certain proof before you drive entire industries out of business and cost millions their jobs. For this reason, unless you find the proof or change these positions I could never vote for you, even if it means not voting at all.